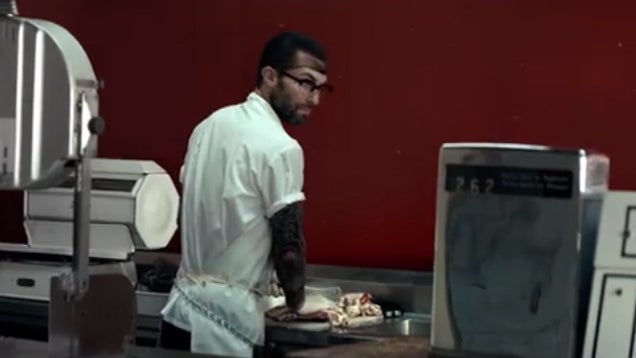 But nothing’s as bad as a new video from Maroon 5.

Rain, and the click of a bloodless aperture: opening and closing, closing and opening. A high-pitched wail floods your senses, the screech of a gleeful ghoul. “Baby I’m preying on you tonight,” he howls. “Hunt you down, eat you alive.”

The well-known lingerie model Behati Prinsloo walks into a butcher shop and thinks for a minute. “I’ll take… two meats,” she says finally.

But the butcher has other plans.

He goes home (to the back of his butcher shop) and prints lots of pictures off the internet. “I’M A DETECTIVE,“he murmurs to himself in the darkness.

“And now,” he whispers, “I must get swole amongst my meat.”

Oh, it’s an old story: butcher meets girl, butcher forgets the difference between different types of eating, butcher gets lonely and wants to hang out with his meat, butcher sits by meat’s bedside taking pictures of meat as it sleeps.

But not before Meat Girl gets the chance to hit up the clurb!

“We gotta get CLUB on the side of that building,” yawned the art director. “Otherwise… people will be, uh…”

The butcher enters the club, where another band is playing his song (classic “Maroon 5” decoy technique deployed by murderers).

He invokes a no-fail move of seduction.

The hunger of undead centuries weighs upon the butcher, and at long last: he feasts.

Oh no, what’s that in the corner.

It’s just a meat-a-fucking-palooza in here.

The subtle theoretical complexity of this metaphor begins to weigh upon the viewer. The ancient numerology begins to kick in. A-D-A-M is only a few letters away from A-S-H-L-E-E, who wrote in her rock manifesto “Autobiography” that she had “stains on her T-shirt.” Stains = blood. Blood = MEAT.

Well, at long last, the butcher is sated.

And don’t forget: he’s not a goddamn douchebag.

Top Or Bottom: How You Dance Determines It!

Chris Pratt Kicks Off SNL Season 40, Rubs A Guy’s Crotch In The Process

Chris Pratt Kicks Off SNL Season 40, Rubs A Guy’s Crotch In The Process